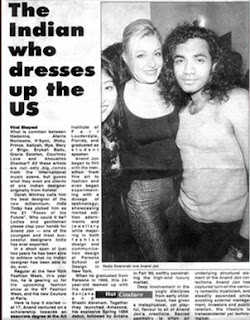 Anand Jon is somebody that we Indians can really be proud of.  It is primarily the IT field that brought India to the forefront of the world power.  In Fashion designs, India is known all over the world, mainly by the works of Anand Jon, as you can see from the following.

Email ThisBlogThis!Share to TwitterShare to FacebookShare to Pinterest
Labels: racism