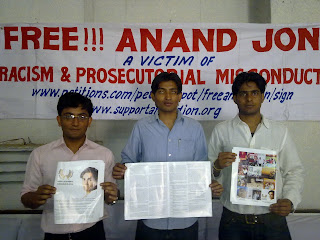 Anand Jon was born in South India and came to the U.S. to study at the Art Institute of Fort Lauderdale and later at Parsons The New School for Design. He sold collections at stores including Bergdorf Goodman, in New York City, Wilkes Bashford, in San Francisco, and Luisa Via Roma, in Florence, Italy. His clothes had been modeled by and designed for celebrities such as Paris Hilton, Rosario Dawson,Lawrence Fishburne,Gina Torres,Oprah Winfrey and Janet Jackson. His style was primarily known for its' specific detail and Indian influence.

The prosecution had send the same complaining witnesses to different juridiction from LA to Texas to New York to create bail gridlock,we as a community coming forward on the raksha bandhan day to free our brother anand jon and look into this travesty if justice.

Sanjana Jon ,Anand Jon's sister alongwith their indian brothers and sisters including leena singh ,rohit bal,charu prashar,aditya raj kaul among others will make a plea to rahul gandhi ji and our government to intervene in the matter in freeing this innocent indian citizen


*TOUTED AS CULTURAL AMBASSADOR OF INDIA
*AMONG 50 TOP NRI'S
*PICKED BY NEWSWEEK AS ''TO WATCH OUT FOR'' IN 2007 ALONG WITH UNITED STATES'S FOREIGN SECRETARY HILLARY CLINTON AND PRESIDENT BARRACK OBAMA.

FACT IS STRANGER THAN FICTION
even after proving that every single alleged complaining witness was lieing anand jon was never given a fair bail ,a fair trial or a fair verdict

more than 50 % rape allegations are false in us-

Anand Jon today is paying the price of being brown skin Indian boy having attained level of celebrityhood and success .

Anand Jon was found guilty by color .
Racism in the United States has been a major issue since the colonial era ,this case of injustice is a perfect example of one.

We need our indian government to intervene not in the legal system but the illegal system which has denied justice to this indian brother of ours.
Posted by FREE ANAND JON at 12:57 AM