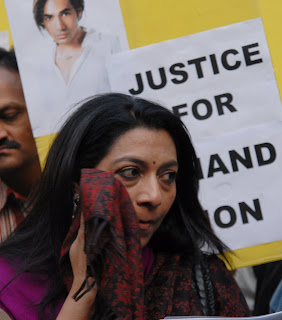 I have not seen the sky in months – six, maybe seven. Kind of easy to lose track of time and yet be unbearably aware of its existence. I am awakened at around 5:30 a.m. usually and on court days (once or twice a month so far) about 4:30 a.m. and then remain in shackles while being “sergeant-escorted” to a tiny moving metal vertical coffin in a van and transported underground to the downtown court.

The time in front of the judge is the only time I am not in shackles and handcuffed. The wait in the holding tanks, usually 3 feet by 7 feet high, is among those disorienting experiences that are carved into your sensory memory, some days as long as 18 hours, surrounded in filth of both indefinable and unidentifiable sources.

Welcome to the strangest episode of my blessed life as I near one year in L.A. County jail.

There is a possibility I may not survive this ordeal. I realized this most blatantly while in a holding tank at court, the only place where you actually “interact” with another inmate with only steel bars separating you. “I’m glad we got to chat, Don Juan, ’cause based on what that detective said about you on TV, I was going to cut you,” grinned the inmate. Any doubts I had about him joking evaporated as he pulled out a homemade “shank” (jail term for “mini-knife”), which he had somehow snuck past two strip searches while being handcuffed.

The threats against me escalated over the first five months, and it got so bad that my food was being kicked around and there were all-night howling sessions and hurling sessions of substances with such aggression that it is better not discussed. One deputy demanded why I eat kosher and how it meant to him that a rabbi spit into the food as a blessing. When I was arrested, the detective’s severe racial and anti-Semitic comments echoed – the prejudice, the bigotry gave me a taste of what my ancestors endured.

Before I was moved to total solitary confinement, I was on a “high profile” row and was constantly made fun of due to my total ignorance of “crime as a culture.” A local drug pusher to the clubs who, being familiar with my case, commented, “I can see why they hate you…It’s your image and attitude. You come off as the perfect party guy, and these chicks, even if they don’t get to make it big, at least expect guys to pay for them to get high, party, and get laid, and that’s what they expect. And what do they actually get? A workaholic into passion and meditation who avoids substances and wakes up at 6:30 in the morning.”

Yoga, meditation, and the love of my family and God have sustained me as I grapple with blankets that have blood stains dried in tie-dyed patterns and battle nocturnal visits from entities that include, but are not limited to, rodents and insects (that I have not even seen in the jungles of India!). How much of it is my imagination? I’m not really sure. But the whole thing feels like a Stephen King novel turned into a movie directed by M. Night Shyamalan.

A fair trial is a wonderful concept but more of a satire in my case, based on how this has been manipulated and has been anything but fair. No one besides the parties involved (traditionally “two”) knows IF intimacy/sex even happened or much less if it was consensual or not. Wouldn’t one call 911? Get a rape kit or at least STD testing? Would anyone continue to follow, travel, live with someone who allegedly assaulted them?

How can one defend himself without access to his last eight years of life, witnesses, records, paperwork? And how is one supposed to possibly fund all of this without being able to work? The few hours that one can get a private investigator at $125/hr inside to meet, how effective can that be? All the while both hands of mine chained down to the table so I can’t even flip a page or write notes!

More ironic is the fact that none other than the very chaperone who was there to protect me, today she and her daughter are among the leaders of the pack.

A “fair trial” seems more like a “fairy tale” when ALL the exculpatory evidence has been kept hidden from the grand jury by the prosecution. When you find out about witnesses being coaxed by the detectives. Conveniently the texts and all traces of favorable evidence have “disappeared” from the cell phones and computers seized.

I realize that this is the test. While some get a trial of fire, some inherit an inferno, and all one can choose is how we face these adversities. Either we do so in despair or in dignity. A hundred lies cannot change the truth.

I do know that there is a purpose to all of this and it is beyond my own exoneration. God clearly had bigger plans for me than just influencing the hemlines, and though I can and will win this ordeal, I may not survive it, and this makes me concerned about the pain my loved ones will go through.

It is a fascinating concept that I think more about them than myself. My pencil (I only get two per week) is running out of lead, so I also learn patience. Maybe that’s what it’s all about – taming the ego and revealing love.

Love and Light,
Anand Jon
Posted by FREE ANAND JON at 1:49 AM