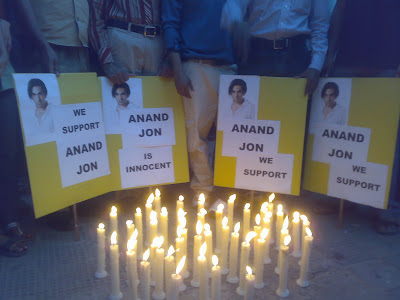 Anand Jon, an Indian Citizen Living in the is a Victim of False Allegations and Needs his Country’s Intervention.

This release is based on the outrage of the international Indian community regarding the injustice in Anand Jon case, to highlight a great injustice being committed to a young Indian citizen and request the government of India to intervene and take active participation on behalf of one of their citizens, Anand Jon, by ensuring that justice is served.

We are asking that the Indian government watch to make sure that these proceeding are conducted properly. A glance at this case raises serious concerns of racial prejudice, prosecutorial misconduct, and gross human and civil rights violations throughout the proceedings.

The Court records show absence of a fair investigation, a fair prosecution, fair jury, or fair trial. At the very least Anand Jon deserves a fair new trial with a fair bail immediately. And the only way now he can get a fair trial is by extraditing him back to .

The accusations are nothing but lies and fabrications of individuals’ intent on making their fortune by causing his misfortune. However, what is most shocking is that the personal relationships and agendas of the prosecution’s team seem to have not only been aware of these motives and conspiracy but they showed deliberate indifference by ignoring and even suppressing such evidence that would prove that Anand Jon was framed.

Despite a negative rape kit and witness statements favorable to his innocence Anand Jon was arrested in March 2007, in . Anand Jon has been held in solitary confinement for over two years without even a fair bail.

At least one of more jurors admits that they wanted to vote not guilty until they were pressured to change their vote against their will. Although Anand Jon beat 43 counts he was found guilty of 15 but under very suspicious jury deliberations of over 9 days of hung jury which included inappropriate / lewd touching, encouraging underage drinking, and an “attempted kiss” referred to as sexual battery. However, he was also found guilty on the only serious count of forcible rape, which has baffled all legal analysts as the rape kit was negative for any signs of trauma. “no signs of use of any force, no injuries, no trauma,” admitted prosecutions own lead expert Dr. Schulman, while the 19 year old women’s own contradicting testimony does not qualify the legal or logical basis for such a conviction.

Anand Jon passed a polygraph (lie detector test) based on these charges. The prosecution lied to the New York Times to create a negative media hysteria stating “violent crimes”. When pressed by Judge Wesley the prosecution begrudgingly admitting that there was “no violence, no injuries and no weapons used” in this case. Because the case involved special circumstances against multiple alleged victims, the penalty is a mandatory life sentence. Therefore, unless this situation is properly addressed by default Anand Jon may not be eligible for parole until the year 2075 (67 years). He was scheduled to be sentenced on . As of , an astonishing 8 months after the verdict, the prosecution’s own misconduct has been uncovered which has significantly compromised the validity of this verdict. In addition to prosecutor misconduct there was the explosive unraveling of juror misconduct that is now at the center of a motion for a new trial.

There are criminal proceedings currently pending against Anand Jon in three jurisdictions using more or less the same complainants that were rejected in . NY prosecutors admitted to defense attorney William Petrillo they would not have looked at any of these counts individually and that NY filed due to pressure and the appearance of volume by LA lead detective George Elwell under the LA prosecutors. It appears that the prosecution’s strategy is to tie everyone up simply by appearance of volume. Even detective Cordon in Dallas testified that almost all the investigation came from the Beverly Hills Police Department / Detective George Elwell. The sole purpose of this multi-jurisdiction façade orchestrated a legal gridlock and denied Anand Jon any bail in violation of his civil rights.

It is surprising to note the amount of racist comments that exist in various documents of court proceedings. One is also shocked at some of the comments by the prosecution’s witnesses during the trial including, “Indiahead” and “curry smelling dick” while the prosecution themselves seemed to have inflamed racially prejudiced suggestions such as “attacking white women”.

Anand Jon’s conviction is a miscarriage of justice and that the government of should intervene on his behalf not only to seek justice for him but also to prevent future mishaps involving its citizens. If they can do this to someone this high-profile that Beverly Hills Judge Fox stated in court has “no violent criminal history, is not a threat to society and is not a flight risk” then they can do this to anyone from the Indian community – celebrity or not.

Anand Jon has been the victim of a scheme orchestrated by disgruntled models who were hoping to gain fame and fortune by being the new “Anand Jon Model” and were outraged when their anticipated position or romantic aspirations did not materialize.

The defense is demanding a new trial based on juror misconduct (among other infractions). It is important for the good of all Indians living abroad that they are not railroaded, ill-treated or misrepresented by other governments simply for being an outsider. There were racial epithets that started with the arresting officers and still exist in blogs and comments on the web. Some of the complaining witnesses complained about law enforcement officials were racially prejudiced. This should not be tolerated.

Anand Jon Alexander is one of the most high-profile South Asians credited for introducing “Indo-chic” as the first Indian to show at NY FashionWeek, Bryant Park. He was featured by Newsweek Magazine’s “Who’s Next 2007”; selected as Faces of the Future by India Today; winner of numerous awards and accolades, including the Rising Star Award” for The Asia Society and for Fashion Week of the Americas. While he was a celebrity judge for Miss India and regularly featured on TV shows such as America’s Next Top Model it is no coincidence that almost all these allegations stemmed around the timeframe of his Wall Street financing.

Anand Jon was raised in by an affectionate and well respected family and graduated from Bharathiya Vidya Bhavan, Kerala, and later at Padma Seshadri, Saint Michael’s Academy in Chennai. At age 16 he went on a scholarship to the Art Institute of Fort Lauderdale where he graduated as the valedictorian. Anand Jon transferred to the prestigious Parsons School of Design, The New School where he graduated with a double degree in 1998. Tim Gunn was the Dean of the during Anand Jon’s matriculation; he is the current host of Project Runway and Tim Gunn’s Guide to Style. Mr. Gunn described Anand Jon in his recommendation release as “a visionary and a leader”.

At 24 Anand Jon teamed up with his mother and sister and became the first Indian to show at New York Fashion Week / Bryant Park and went on to have the who.s who of society, celebrity and young royalty as his clients. Those clients and friends include: Paris Hilton, Amanda and Lydia Hearst, Bruce Springsteen, Lawrence Fishburne, Gina Torres, Oprah Winfrey, and Janet Jackson to name a few. As a result of his success, Anand Jon sold collections at highly respected establishments including Bergdorf Goodman, in , Wilkes Bashford, in , and Luisa Via Roma, in . Anand Jon.s active role in charities includes the AIDS Awareness Tour to with Miss Universe and his sister Sanjana Jon and included Michelle Rodriguez and Kal Penn in the launch at the United Nations in . He supported the Tsunami Relief with Hillary Clinton in 2005 and the Nature Sanctuary for abused animals.

Unfortunately, the price of success and fame resulted in placing Anand Jon and his family as targets for what appears to be nothing short of a conspiracy involving his own disgruntled business associates and roommates. Their failed extortion attempts and publicity attempts and civil suits turned into criminal allegations. At least six of these witnesses are involved in suing Anand Jon civilly.