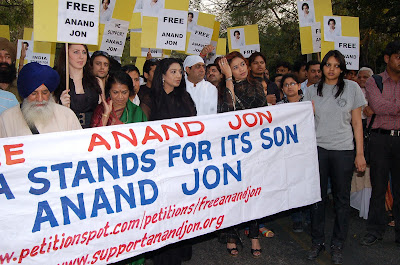 The drama of the Anand Jon case was on maximum overdrive as rogue juror Alvin Dymally took the stand. Dymally has been accused of juror misconduct during the trial that would lead to a new trial for the young fashion designer.

In yet another dramatic plot twist to the trial reminiscent of M. Night Shyamalan movies, “a bombshell was dropped Friday by [the defense] presenting an audio tape they say proves a juror spoke with their client's sister during trial, contradicting the juror's sworn testimony given hours earlier.” (AP / Greg Risling) “[Defense attorney Leonard] Levine said he had never been involved in a case with so many twists and turns.”

The hearing Friday brought to light the seriousness of the allegations. Dymally seemed to be playing a game as he testified. He neither fully denied nor really accepted the serious juror misconduct allegations.

“Let me put it this way…I don’t fully remember” was all the juror kept repeating like a broken record. He would go on major tangents elaborating on even the simplest “yes” or “no” response but committing to nothing fully.

Defense attorney Leonard Levine spent 5 grueling hours deciphering Dymally’s studied “rambling”, stripping away his lies under oath with past inconsistent statements. “I know I didn’t have a conversation with her,” Dymally adamantly testified. (AP)

The wait was well worth it as Dymally’s perjury and major inconsistencies left huge holes in his own stories. Finally he had no choice to concede that he had, in fact, initiated the communication with the Anand Jon’s sister, Sanjana.

The shocked courtroom erupted when a surprise taped communication was revealed. Dymally was left speechless and his lawyer repeatedly requested a recess insisting that his client Dymally answer no further questions. The tape, played in court minutes after Dymally had just denied under oath any such communications with Sanjana during the trial, revealed Dymally speaking with Sanjana.

The quality could have been much better, however, Dymally’s non-stop chatter and accent was distinctly obvious. Dymally talked away for 90% of the 4 ½ minute conversation. Sanjana just kept repeating “thank you.” And “thank you very much.” Profusely thanking a juror would not happen after a guilty verdict, which supports Sanjana’s story and clearly contradicts the juror’s.

The tape starts out simple, but powerful: “Um, I got this number in the cafeteria?”

Then the confirmation from the juror: “Oh, yes, hi. How are you?”

Sanjana’s answer is delayed, scared and shaky: “OK. Um, how are you?”

In addition, the facts presented at the hearing are undeniable - the subpoenaed phone records for October 27th and November 3rd corroborated the phone calls between the two occurring during the trial, which concluded . The defense also contends that the length of the taped phone call equals the first call shown on the phone records.

It was also revealed that there was mysterious contact between the DA investigators and Dymally meeting and speaking on the phone more often than the police reports indicate. Was and is Dymally being coached? Although they are supposed to be independent Dymally’s attorney, Pierpont Laidley, was discussing strategy with the prosecution during the hearing.

This mistrial hearing now supports the last hearing that focused on the recusal of the prosecution. The prosecution intentionally thwarted a defense undercover operation; that operation may have eliminated any doubt regarding this juror’s intentions.

There were several misconduct hearings that put the prosecution on the stand and under a microscope. During those hearings the prosecution team each told different stories amounting to someone, if not everyone, was committing perjury. Surprisingly, they got away with it even though Judge Wesley was “troubled by the interception of the juror” (LA Times / Jack Leonard) “…but the remedy”, stated by the judge in court, “will be in the mistrial hearing.”

Also during those hearings the prosecution tried to take the spotlight off of themselves and their misconduct by sidetracking the court with a collection of images of the accusers. As it turns out these images (most of which were available online) were collected by one of the witnesses in a desperate attempt to make everyone and anyone take notice of the racy character of these girls involved in the trial.

This witness, Lauren Boyette, testified as to the role of her old roommate, Holly G, as a ring leader and conspirator in soliciting, pressuring and instigating these girls to file false allegations against Anand Jon. Lauren testified that she and many of the girls that came into the apartment to meet with Holly (as well as those that Holly spoke to on the phone) were promised fame and money for their participation in the conviction. The carrot dangling was her involvement in a TV reality show that Holly is producing and actively shopping around .

Boyette testified that prosecutor’s lead detective George Elwell offered “deals” to the girls in order to get them to testify against Anand Jon. Referenced was Holly G’s and Lauren Boyette’s arrest and conviction together in that would be “wiped away”. Boyette continued that she chatted online with Holly G. It was admitted during the chats that Holly committed perjury during the trial with the knowledge of the prosecution. These newly discovered chats were turned over to the court.

Boyette concluded her revealing testimony by stating that she was intimidated by the prosecution not to testify – surprisingly just outside the courtroom. She testified that DDA Young and two burly DA investigators cornered her in the hallway filled with people, including many attorneys. Their hands were on their weapons and Young said “if you testify you will regret it”. Boyette hasn’t been seen in court since this intimidation.

It was revealed that Holly G was a roommate of Anand Jon and admitted to disappearing with Jessie B for 2 ½ hours convincing her to press charges against Anand Jon. Upon their return she suddenly she claimed their relationship was strictly professional, in sharp contrast to the personal “Hi Babe. Miss you. Can’t wait to see you!” email that anticipated her visit and that the consensual sexual contact was forced.

The timing of these charges is suspect as Anand Jon’s Wall Street financing for his jeans line was just kicking in.

“Almost all of these charges were initially rejected and the allegations in the other jurisdictions are simply frivolous with little merit” stated attorney Saji Vettiyil, who worked on the Youngblood case where an innocent man was wrongfully convicted and years later was overturned. Unfortunately Youngblood died in prison before he was exonerated.

In fact, the NY prosecution told the defense that on its own they would not have filed even a single charge. It was simply due to pressure from LA prosecution and their package of seemingly similar charges.